If you're following this guide in order (and you should be!), you've already used a tag. In the ex command guide, you tried /ex narrate "hi <player.name>". That <player.name> part is a tag in Denizen. This is somewhat similar to what some plugins call a "placeholder", but with a lot more power to it. The "player.name" tag, as you can probably guess, is automatically replaced with your username.

Tags in Denizen are marked by <> around a description of what value should replace the tag. Tags can get you almost any information you need, whenever you need it.

The most common tags in use, more than anything else, are the color tags. The colors tag are also just about the simplest tags in Denizen. You're probably familiar with the basic color code system in minecraft, like §7 to make gray. You're probably also familiar with some plugins that let you type something like &7 to color text gray. Note that minecraft internally has a section sign § but the usual plugin format is with an ampersand & (this is because § is hard to type, but & is easy on most keyboards). To make text gray in Denizen, you type <&7>, which is still easy to type, but specifically formatted using the tag system (meaning it has <> around it, indicating that <&7> should be replaced by the actual internal light-gray color code with an §). You can also, instead of that, type <gray> to get the exact same result... which one you choose is up to your own preferences (do you like short tags, or clearer tags? Do you better know the color's names, or their internal ID numbers?). You can also do <&color[gray]> or <element[my text here].color[gray]>, or... a lot of other ways of writing the same thing. As you get farther in this guide, you'll notice that having a whole bunch of options for how to achieve the same goal is a recurring theme in Denizen.

While text colors are the most commonly used tags overall, almost any real script is going to use a bunch of tags that are a little bit more complicated than just color codes.

Tag usages can get way more complex, like - teleport <player.location.find_entities[living].within[<[range]>]> <player.cursor_on[<[distance]>].if_null[<player.location.forward[<[distance]>]>]> ... don't worry if that doesn't make any sense, it's intentionally long and complicated, just to give you a taste of the amount of power tags have in the hands of an experienced user (and that's just a start - the only limit is the scripter's imagination!). Basic scripts will almost never require tags this long.

As you might have guessed looking at that longer sample above - tags aren't limited to just a list of prechosen tags we made available. Tags are built by the scripter out of multiple parts to fit their needs.

The Parts of A Tag¶

There are two basic 'types' of tag that are available as building blocks to scripters. These types are: Base tags, and sub-tags.

A base tag is something like <player>, which returns a PlayerTag of the situationally relevant player. There are also seemingly multi-part base tags like <server.motd> (though these are sometimes also thought of as <server> returns a "ServerTagBase" and <ServerTagBase.motd> is a sub-tag of that).

Base tags exist on their own, and can only be used as the first part of a tag. Every completed tag has exactly one base tag in use.

A sub-tag is something like <PlayerTag.name> which returns an ElementTag of the applicable player's name. A sub-tag, in documentation, will always start with (Something)Tag, like PlayerTag or ItemTag. Anything that isn't in this format is a base tag.

Sub-tags are tacked onto the end of an existing tag. A complete tag can have any number of sub-tags - zero (just the base), one (a very simple tag), five hundred (an incredibly long tag), or any other number.

We saw the sub-tag example <PlayerTag.name> above. When a sub-tag starts with "PlayerTag", this basically means "insert a player here"... since the base tag <player> returns a player, and <PlayerTag.name> needs a player as its first part, you can combine these to make <player.name> which returns the name of the situationally relevant player. In the case of the /ex command, <player.name> returns your name.

The tag <PlayerTag.target> returns whichever entity the player is looking at. If you use this while looking at another player, this will return a PlayerTag of that player. So, we can use the rule of "insert anything that returns a valid PlayerTag anywhere it needs a PlayerTag" to insert <player> into the tag to form <player.target>. Because we're theoretically looking at another player for this example, we can repeat that rule by inserting this new tag at the start of <PlayerTag.name>. This results in <player.target.name>, a functionally complete tag that returns the name of the player that you're looking at!

A PlayerTag Is A Player In A Tag¶

That choice of wording isn't exactly hard to decipher. A PlayerTag is a player, as represented by a tag, who would have guessed?! Similarly, an NPCTag is an NPC in a tag, an EntityTag is any entity in a tag, an ItemTag is any item in a tag, ... we could go on for a while here, there's a lot of types of things you could use in a tag.

One word we used earlier might be a bit less clear: "ElementTag". An ElementTag is the most basic type of value: anything! An ElementTag can be a number, some text, binary data, or even a player.

Wait, But You Just Said Players Are PlayerTags¶

In Denizen, object types can have sub-types. The notable example is that PlayerTag and NPCTag both have the sub-type of EntityTag. What this means, is that anywhere an EntityTag is needed (for example, the tag <EntityTag.health>), a PlayerTag or NPCTag can be inserted and it will work exactly as expected (so, <player.health> will return the player's health value).

ElementTag, as was said, is the most basic type of value. Every single object type in Denizen has the sub-type of ElementTag. This means that anywhere an ElementTag is needed, any value at all can be inserted. A PlayerTag, an NPCTag, an ItemTag, or anything else, all are valid inputs to anything that takes an ElementTag as input.

Some tags need an input value. For example, the tag <util.random.int[<#>].to[<#>]> takes two simple numeric input values (the 'from' and the 'to') and returns a random number between the two.

At the most basic, these inputs can simply be filled in with whatever type of value they expect. So, you can type into your in-game command line /ex narrate <util.random.int[1].to[10]> and it will, as expected, narrate back a random number from 1 to 10. If you repeat the command a few times, you'll get a different random number each time (except when it repeats, as true randomness tends to do sometimes). 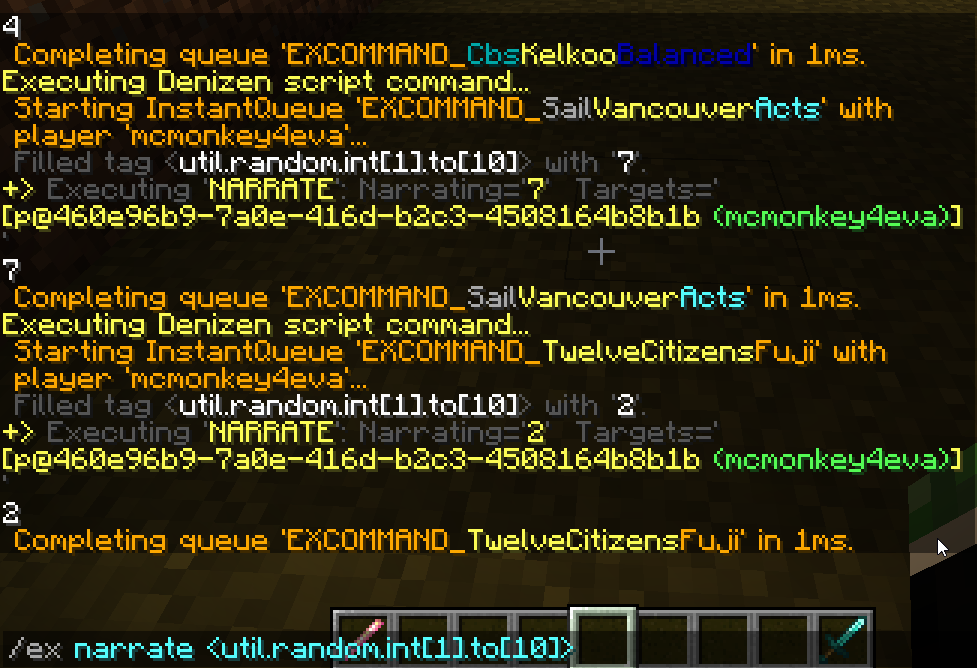 Simple value inputs are good for testing, but in real usage, you'll often find reason to put a dynamic value into the input of a tag. Here's a fun sample script:

Every time this sample script runs, the player will lose a random amount up to half of their health, usually less. It will also tell them what their health was before and after the damage is applied.

That inner tag is formed from <player> to get the linked player, <PlayerTag.health> to get the player's health value, and <ElementTag.div[<#.#>]> to divide the value (in this case, by 2).

In the future, when writing real scripts, you of course won't be expected to just memorize the tags that are available to use. In a later section we'll see the ways to find the tags that are needed for any given script idea. Until we get to that section, this guide will show you any tags you need to practice the ideas taught on any page.

There are some words used on this page that are specific to Denizen. For the most part, the context of their usage should be enough to give you the idea of what they mean... But, just in case, here's some explanations to make sure you understand the words used properly:

If you want to read a lot more about tags, here are a few technical guides you might consider...